I question why the focus of education in the United States has shifted
from trust in a teacher’s education and knowledge to the trust that
standardized testing is the most effective way, apparently the only way, to
determine student success. That this has become the determining factor in
evaluating student progress, teacher effectiveness and school standards is a
troubling trend.

The current public education model is based on unfounded assumptions.
Assertions from national and state authorities that testing is an essential,
proven means to ensure that all students have equal opportunity to acquire
knowledge and reach skill goals that are uniform in all American schools are
not supported by observational data. According to the 2000 U.S. Census
Bureau’s statistics on education, the maps of the country “reveal broad
geographic differences in educational attainment and high school enrollment
patterns nationwide.”

The belief that American students and schools are, or can become,
superior to the educational quality of students and schools from other
nations is laughable and unrealistic. Those who make educational policies
and set the criteria for educational standards continue to ignore the input
and concerns of those who do the real work on the front lines, so to speak, of
trying to teach kids within a broken system. Empirically, the arguments of
those who promote the benefits of testing lack confirmation by any
demonstrable gains in the educational achievements of students in the
United States.

Administrators from the U.S. Department of Education to the
educational departments of the states, including Florida, are hood-winked by
questionable unsubstantiated, often manipulated, statistical evidence.
Politicians, Lobbyists, and CEOs of testing companies have very little
knowledge of the problems associated with testing, nor do they have any
interaction with those who are most directly affected by tests.

END_OF_DOCUMENT_TOKEN_TO_BE_REPLACED

Back from Too High to Go to Woodstock: Reflections on my life and times, Sarah E. McIntosh in Stupid Schools, Stupid Students: Get Smart once again reveals her intellect, wit, and directness. This time she takes on the world of standardized testing. Listing dozens of examples of “stupid” phrases written by well-intended (though, apparently, under-educated students), McIntosh substantiates the point that standardized testing has done more damage than good in educating America’s children. Teachers, administrators, and parents will whole-heartedly relate.
Valerie. M. D’Ortona, Big T’s Heart’s in Me! 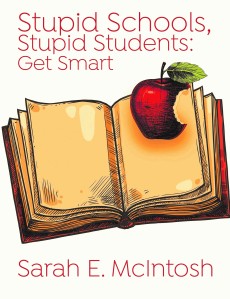 The last “Stupid” proof just went back to the Publisher. Well, to clarify, the last proof for my book Stupid Schools, Stupid Students: Get Smart just went back to Black Rose Writing and is on track for its publication date: February 7th, 2019!

Planning for promotions will take up some of the intervening time and even more time after it is released. In the meantime, I’m plotting other books, or more accurately other books are plotting themselves in my head. I’m leaving my brain out of it for now.

As the self-professed Bad Blogger, I have been slightly more diligent with posts in 2018. So, I figured I’d better get one more post in before the year runs out. Hope springs eternal and I hope that next year will see the addition of a new post every month or better yet every week. It’s not quite a lie if my intentions are good…or…hmmm?

My Gallery of Weird Art is growing exponentially and strangely so check out the Art category as I hope-there’s that word again-to display more and more more often.

The expanded title of “Stupid” is Stupid Schools, Stupid Students: Get Smart.

All these are real quotes from real students. Really!

These are just a few of the examples that are scattered through my book.
Is it the students who are stupid? Is it the schools that are stupid?
The premise of my “Stupid” book is that standardized tests are a contributing factor to Stupid, schools or students.
There are a lot of books about testing. Some are about the benefits, some about the drawbacks. Arguments both for and against standardized testing are battled out in words.

Some readers or other authors may think I just add more stupid. Some may even think I’m stupid.
What my “Stupid” book adds to the other books about education and standardized testing is the reality of the type of work students are doing. All the talk and discussions about the pros and cons of education in the United States isn’t going to change the reality of what students are learning or not learning.

Once the examples in Stupid Schools, Stupid Students: Get Smart are seen, they cannot be unseen.
Stupid is Scary!

My book Stupid Schools, Stupid Students: Get Smart draws attention to the urgency for needed changes in  American education policies. My latent radical roots from the 1960s are showing.

Children are dying. Education, learning, growing up are no longer major concerns in the minds of young students. Will I get shot today? This is not a question that should be in the minds of our children. This is not a question that should be in my mind when I am at one of my substitute teaching assignments. There is absolutely no excuse, none whatsoever!
All the arguments about guns and the second amendment are not stopping the murders. While adults argue, children are DYING. There is no argument or excuse that makes this okay. Worse, students being shot in schools is now so common that it barely registers as surprising news.

I am heartened to see a new radicalization of our youth. My attendance at a couple rallies adds another body to the protests, but I need to do more to keep the body count of dead students from rising. Dead kids can’t rise. We must stop the carnage.

Protests in the 60s were about an unjust war and a draft that sent young men off to die in Viet Nam. We had the power of numbers and knowing we were right and could stop the war. That’s what I truly believed, so did a lot of protesters. We stopped the war. Maybe it wasn’t that simple, but our voices and bodies together were a powerful and effective force.

Now the battlefield is on the home front. There’s not even a fucking war!
I will not stand silently nor will I let our youth stand alone.

We may have a lull over the summer, a few weeks without a new bloodbath, at least in a school. I think about huddling in a lockdown with a group of 3rd graders who did not have to be reminded to be silent. They were too scared. The adults knew this was a drill. The kids didn’t. Maybe these students will get a break from worrying and dying.
It is not acceptable to have active shooter drills. Securing schools is not just stupid, it is ineffective. It is not going to secure the minds of our children, secure them from wondering if they will be the next to die.

Right after the unspeakable blood bath (tragedy is too clean) at Marjory Stoneman Douglas High School, I was in a high school class when, at the end of the day, the fire alarm went off. I did not know whether to take the students outside in case there was a fire or keep them inside in case there was a shooter. We did go out, all of us looking around to see if we were going to be shot.

I guess the title of my book on education should just be Stupid, just fuckin’ Stupid!
Kids won’t have to worry about education or the future if they’re dead.

Writing and the hope for publication is not an easy process, particularly the latter, so bear with me, if you will, while I revel in a rare bit of self-promotion and puffing-uppedness.
Referencing “Judge, 25th Annual Writer’s Digest Self-Published Book Awards”, the judge who reviewed Too High to Go to Woodstock: Reflections on my life and times, commented:
Candid and revealing in its painstaking recollection of a life marked by drugs, sex and depression this memoir captures a succession of turbulent and trouble filled days and nights. The stigma of mental illness, odd relationships, and slipping into being a drug dealer as well as an addict all convey the downward drift of the author’s life as she plods through her early family days and growing up, some random jobs, school, pregnancy, divorce, life as a hippie in a commune, and ultimately becoming a teacher. One can easily appreciate the many little epiphanies that spark the often vivid pages as she witnesses herself with brutal honesty. The first person writing is unstinting in self-description, which isn’t particularly favorable.
This judge adds “Photos embellish the frank text. A roster of national help organizations with toll-free numbers and other key information provides an excellent resource.”
Needless to say, I was very pleased with such a positive review. Thus, inspired to continue with more writing projects, I will move into writing those ideas that have been lurking in the back, or at least somewhere, in this thing that might be called a mind.

It has been a joy to write my story and have the opportunity to share with readers the logic that informed my crazy, chaotic life during the era of great bands, music and lively concerts such as the famed 3 days of the Woodstock Festival. I missed it. The 1960s and 70s were an ongoing festival as the sex, drugs and rock ‘n roll continued unabated.

Life has a way of moving along despite ourselves and I am no exception. The 80s brought insights and changes that I couldn’t have imagined and as the century changed, I discovered myself on a different path. Along the twists and turns, recollections from the past remained part of my experience and the melding of the old and new years provided me the memories and insight to put together into a book. Readers can now enter my world, a world that existed both in the middle and on the edge of an incredible era in history.

Too High to Go to Woodstock: Reflections on my life and times is also available as an eBook through Amazon and Barnes and Noble.